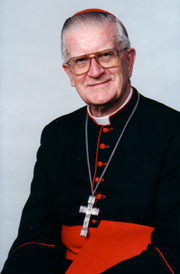 Edward Bede Clancy was born in Lithgow on 13 December 1923. He was educated at Holy Camp Public School (Grenfell), St Monica’s Primary School and Good Samaritan School, Richmond and Marist Brothers’ College, Parramatta. He was ordained a priest by Cardinal Sir Norman Gilroy, (Archbishop of Sydney), on 23 July 1949. His first Parish as a Priest was Belmore on December 1949.

A scholar in his own right, Edward Bede Clancy graduated with a Licentiate in Theology (STL) from the Angelicum University. He also pursued studies in Scripture, graduating with a Licentiate of Sacred Scripture (LSS) from the Pontifical Biblical Institute. He would continue to pursue his interest and passion for scripture into Doctoral studies, graduating in 1965 with a Doctor of Sacred Theology (STD). Upon his return, he was very much involved in the formation of priests, being on the staff of the seminary and teaching as a Professor of Sacred Scripture. He also had a great love of sport, especially Cricket.

Pope Paul VI appointed him Titular Bishop of Ard Carna and Auxiliary Bishop to Cardinal Freeman. His Episcopal Ordination occurred on 19th January 1974. Within this role, he became the spokesperson for the Archdiocese of Sydney. On 24th November 1978, Pope John Paul II appointed Bishop Clancy to the Archdiocese of Canberra and Goulburn. On 22nd February 1983, Pope John Paul II announced Archbishop Clancy’s appointment as the seventh Archbishop of Sydney, with the retirement of Cardinal Sir James Freeman. Cardinal Clancy was elevated to the Sacred College of Cardinals by Pope John Paul II on 28th June 1988.

During his tenure as the Archbishop of Sydney, Cardinal Clancy had a many other responsibilities. Some of these included: being a member of the Council of Cardinals and Bishops; President of the Australian Catholic Bishops Conference 1986-2000; Chancellor of Australian Catholic University 1991. He was a member of the Congregation for Bishops; the Pontifical Commission for Pastoral Care for Health Workers; the Council of Synod of Bishops, Pontifical Commission for Social Communication; and the Council of Cardinals for the study of economic problems of the Holy See.

Cardinal Clancy retired on 10 May 2001 and was succeeded by Cardinal Pell. Cardinal Clancy entered eternal life on Sunday 3rd August 2014. His funeral Mass and rite of Christian burial will occur at St Mary’s Cathedral on Saturday 9th August 2014. A more detailed biography of the life of Cardinal Clancy can be found by visiting the website of the Catholic Archdiocese of Sydney, from which some of this information was sourced.

Eternal rest grant unto him o Lord.
And let perpetual light shine upon him.
May he rest in peace.
Amen.