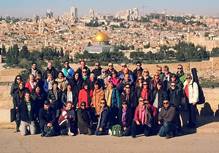 Encountering The Abrahamic Faiths Pilgrimage – Signs Of Hope In A Complex Land.

In January of this year I was extremely privileged to lead a group of 45 very excited and very eager pilgrims, ranging in age and teaching background and life experiences, to the Holy Land.

We gathered for 3 pre-pilgrimage meetings in 2014 where we began to conceptualise the journey we would be taking. Even though we had met on these three occasions when we gathered at the airport on the 4 January we were 46 individual pilgrims, some of us knew one another, but most of us were strangers bound mainly by our connection as teachers in Catholic schools.

We had our itineraries and knew that each day brought with it a full day of exploration. Now we would actually ‘be’ in the places we had all studied and heard of in the Scriptures, we would actually walk on and see the places that God had promised to the chosen people and where Jesus had lived and taught and died. We were about to experience the land of the fifth gospel!

The group was blessed with the most amazing guides- ‘Fadi’ in Jordan and ‘Rami’ in Israel and Palestine. As a pilgrim group we stood at the top of Mt Nebo where Moses looked out across the Dead Sea to the Promised Land and the place Christians believe is where he is buried. We visited the fields where the Shepherds saw the star to tell of Jesus’ birth; the site in Bethlehem where Jesus was born and the place where Jesus was baptised. We sailed on the Sea of Galilee and stood on the Mount of the Beatitudes and the Mount of Temptation. We engaged with the sites where Jesus carried out his work with his disciples; we stood in the synagogue at Capernaum where Jesus preached; we stood beside the well where Jesus spoke with the Samaritan woman; we walked past the Garden of Gethsemane where Jesus prayed; we gathered in the place where Jesus was imprisoned, where he was crucified and where he rose from the dead. We visited the Western Wall and stood beside our Jewish brothers and sisters as they prayed and then we celebrated a Shabbat meal. We were also welcomed into the largest Mosque in Jordan to see where our Muslim brothers and sisters prayed.

Each day we celebrated the Eucharist in the most beautiful places such as beside the Jordan river where Jesus was baptised; at the Mount of the Transfiguration; in the grotto at Shepherds Field; at Bethlehem University; at the Church of the Annunciation in Nazareth; at Mt Carmel; at Dominus Flevit where Jesus wept over Jerusalem and in the Holy Sepulchre and we were so blessed to have Fr Paul Durkin as our spiritual leader and guide to walk gently beside us and with us as a fellow pilgrim.
Whilst these experiences were absolutely amazing and very hard to convey into words, the most moving experiences came when we engaged with the people. Our guides gave us the greatest insights into not only the places we visited but also the people and the complexity of their lives.

Our first interaction was with Jamal and his mother Agnes at the ‘House of Grace’ in Haifa. Jamal’s father Kamil believed that every human being represents God’s image in this world. Agnes and her husband Kamil were married in 1982 and their first task was to renovate a very run down and deserted church and its surrounding buildings which is now the ‘ House of Grace’. With Kamil’s vision they began caring for released prisoners, inviting these men to live in their home with their growing family.

This Christian family wasn’t concerned with the social, religious political or ethnic affiliation of these men who had no support in society as they left prison. All this family could see was that these people required love and support which the general society wasn’t offering.

Kamil died in the year 2000 and now Jamal and his 4 siblings support their mother in continuing this work. They rely on donations and the generosity of others to fund the many projects they have set up. Jamil’s words stayed with me from our visit that to do what you can in a very small amount of space/ time/ money in this world needs only to involve one element – LOVE!

This was the first of many pilgrimage experiences where our hearts were bursting with admiration for this family who live every single day of their lives seeing the face of God in all people. You can read some more about this amazing family at http://www.christianitytoday.com/ct/2013/october/open-doors-in-divided-land.html

In Jerusalem the pilgrimage group met with two fathers who told us of their heartbreaking stories. A Jewish and a Muslim man stood side by side as ‘brothers’ telling our group how their young daughters had been killed in the conflicts of the Holy Land. They keep the memories of their little girls alive as they speak with many groups to promote peace and reconciliation between all people. They gave us such a strong message of love and of replacing pain with hope. These 2 amazingly strong men are a part of the Parents Circle-Families Forum which is a grassroots organisation of bereaved Palestinians and Israelis promoting reconciliation as an alternative to hatred and revenge. You can find out more about this group at the following link: http://www.theparentscircle.org/

In Bethlehem our pilgrimage group divided into two groups where one group visited with the Ephpheta Paul VI Pontifical Institute audio-phonetic rehabilitation Centre for deaf children and the other half visited the Holy Child Program a school which focuses on intensive therapy and education for children suffering from the effects of trauma. There are 30 children at this school who receive individualised programs to accommodate the specific needs of each child. The school is doing the most wonderful work with children who come from both Muslim and Christian families. They do not receive any government funding and the school relies on financial contributions from very generous people for their work to continue. As a Pilgrim group we took some simple resources to the school which they were so grateful in receiving. You can find out more about this wonderful school and how you or your school community might be able to assist them at: www.holychildbethlehem.org/

Towards the end of our pilgrimage we crossed the border returning to Jordan where our guide Fadi had organised for our group to meet with thirteen families who were living in the local Christian Orthodox Church Hall and Presbytery.

Our group gathered in a meeting room near the Church and as our guide Fadi translated for us, a very distinguished gentlemen told us how his family had been been given 24 hours and forced to leave their beautiful home in Iraq. They were a very well educated and respected family living in Mosul, his wife was a bank manager and the 2 older boys were only months away from finishing their university degrees. The sense of loss and desperation was so evident as they spoke to our group.

For all of the families living here their children have not been able to attend school and as each family is a refugee in Jordan they now have to apply for immigration to another country. The desperation and hurt was obvious in each person’s eyes even though they really tried to put on very brave faces after what they had been through. Some of our group played soccer with the smaller children and then we all shared a meal with these 13 very brave families.

As pilgrims we were invited into their story and our hearts were so deeply moved and humbled and our hands just wanted to assist- whether it be in telling of their courage or by contributing financially. We were told that Caritas was assisting these families so as a group we decided to direct our efforts through Caritas once we returned home.

We found on our journey that it is the people who are the signs of hope for peace in this holy part of the world. There were many signs of hope in the special places we visited and we realised that people are people just wanting to ensure that everyone can live with dignity and love.

As a group we were blessed by the people we met and the places we experienced. Now we have a bond of friendship that we continue to share and to celebrate.