Encountering The Abrahamic Faiths:
Reflections On A Pilgrim’s Journey to the Holy Land January 2015 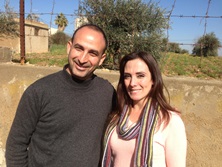 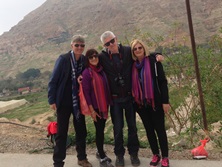 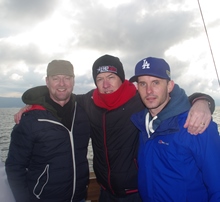 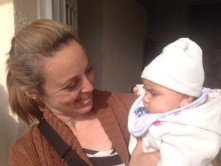 At the start of 2015 the rich tradition of the pilgrimage is alive and well across the globe and shows no sign of going out of fashion. The very word pilgrimage has the power to evoke a host of images: people from a range of faiths and denominations, bearing over-­stacked rucksacks, tramping ancient and historic paths in all quarters of the world, whether it be along the dusty roads of a Spanish Camino, the Judean hills of Israel or some holy river in India. The faithful pilgrim sets out on an arduous passage through some unfamiliar outer landscape or territory that prompts a subtle exploration of the inner. The power of the pilgrimage rests in its capacity to open up and reveal the spiritual essence that resides inside each person – it does so in a myriad of ways, that are simply beyond the scope of the standard package holiday. Connecting with the landscape of one’s faith in the company of like­?minded pilgrims is a rare privilege and a life-­transforming experience in so many ways.

The pilgrim throng of 45 educators from across the Archdiocese assembled at the international terminal on January 4th with a great sense of anticipation for what was to lie ahead in the next three weeks. The program looked to be truly epic in its dimensions. A pilgrimage to The Holy Land. Words that evoke a truly magical place, a landscape of miracles upon which the rich tapestry of the world’s three great monotheistic religions were woven. A land, deeply imbued with faith, whose inhabitants, whether they recite from the Koran, chant from the Torah or read from the Bible, care about it with passion and righteousness.
The personal highlights for me were many and for the most part, centred around the celebration of the Eucharist in places that had been etched into my consciousness since childhood and revisited in the daily rhythms of a 38 year ministry in Catholic schools. It is difficult not to respond with wonder and awe when you have the opportunity to express your faith at Mass on that spot by the banks of the Jordan river, where Jesus began his ministry, or in a cave outside of Bethlehem where the angels announced his birth to lowly shepherds, or indeed inside the tomb where he was finally laid to rest.
Our daily pilgrimage Masses proved to be very special high points, characterised by the magnificent musicianship of the highly talented Anita and Pete, with an excellent cast of backing singers, and the most thoughtful, insightful and reflective homilies from Fr Paul that ‘hit the spot’ every time without fail.

A memorable moment was our celebration of Mass at the church of St Lazarus at Bethany on the West Bank. Dusk was descending and our Mass was concluding with the thanksgiving hymn when the Muslim call to prayer started to blare all around the neighbourhood, filling the church. Undeterred, our trusty musician, Pete, strummed with greater vigour on his guitar, revving us up in good humour to sing louder (in the best spirit of ecumenical outreach and inter religious appreciation) to drown out the Muezzin’s call.
In a land of great geopolitical complexity where Israel and the Palestinian territories appear to be locked in a state of insoluble conflict and where even an acknowledgement of the other’s right to exist seems an admission of defeat, nothing is ever as it seems on the surface. Rami, our guide for the major part of the pilgrimage, an inspiring teacher of deep personal faith, spoke throughout with the utmost optimism for the future of this land that he loved with a fierce passion and always encouraged us to watch out and listen for the many ‘good news’ stories that are there for the pilgrim who is prepared to take the time to listen and be mindful.

Such a one is ‘The Holy Child’ program (www.holychildbethlehem.org), an inspiring school, operating entirely upon donations for its annual operating costs. ‘The Holy Child’ program provides an intense day treatment program and alternative education for children in the Bethlehem region of the Holy Land who suffer from untreated complex mental health issues and exposure to intergenerational trauma. The children greeted us with unrestrained joy and enthusiasm. It is a place of hope and good news stories galore, including the one about the young Muslim boy who received a kidney transplant from an Israeli child a year ago and is being financed by generous Jewish donors. “What is it that inspires such generosity towards one that might be perceived by others as an enemy?” asked the school principal, Iskander, who leads the school, assisted by a dedicated team of educators including his wife.

Another example was the opportunity to meet with two bereaved parents from both sides of the Palestinian – Israeli conflict. We listened to an Israeli father who told the story of how his daughter was killed a few years ago by a suicide bomber in Tel Aviv and a Palestinian father whose daughter was gunned down outside her school by an Israeli soldier. The two fathers, now the closest of friends, stood side by side, hugged each other, united by the grief of their common loss as well as their hope for the future. They shared photographs of their daughters with us and told of how they visited schools across the length and breadth of the Holy Land to speak to students, Palestinian and Jewish, about peace and reconciliation, with a power and conviction that transcended any sense of political or religious ideology.

Towards the end of our pilgrimage we visited a Greek Catholic Church just outside Amman, Jordan, where we met a large number of Iraqi refugees, forced to flee from Mosul after ISIS took over the city. We listened and were moved, to tears in some cases, by the stories of courage in the face of injustice and by the indomitable power of the human spirit to find hope in adversity. Our pilgrim group was humbled and inspired by the selfless servant leadership of Fr George who was sharing his own modest house with a young father and mother and their three small children, the youngest, a little girl, Marianna, born just four months ago in the church.
I have taken away so much from this pilgrimage experience and feel blest to have spent such a special three weeks with such an amazing group of people, my brother and sister pilgrims, who contributed so much to the whole experience in so many ways. The camaraderie on the bus was brilliant, the evening reflections and rosaries were prayerful, the shopping for scarves was intense and the good humour was evident all day and every day – Shabbat Shalom!
In the fourth century St Jerome is attributed to have said that, “Five gospels record the life of Jesus. Four you will find in books and one you will find in the Land they call Holy. Read the fifth gospel and the world of the other four will open to you.”

My pilgrimage has given me a true appreciation of Jerome’s ancient words. Even now just a few weeks after returning and fully immersed in the ‘busyness’ of a new school year, I cannot help but pause and reflect from time to time and imagine that I am back on the Sea of Galilee or gazing from the Mount of Olives towards the holy city of Jerusalem, for a part of me is still in that place they call the Holy Land. I am now seeing the Gospels through a new lens, hearing the messages of the gentle Nazarene with greater clarity, reflecting on the blessings I enjoy in my own life with a deeper sense of gratitude and hopefully speaking to my school community with renewed enthusiasm and vigour for our mission and vision.