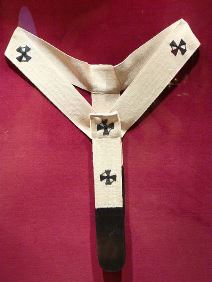 The Pallium has been worn by the Popes since at least the Fourth Century, and its use by certain other bishops was permitted as a sign of a close connection with the Church in Rome, or as a particular honour.

On the feast of St Peter and St Paul on 29 June in St Peter’s Basilica in Rome, Pope Francis blessed forty-six Palliums for Metropolitan Archbishops from around the world, including Archbishop Anthony Fisher OP.

Archbishop Fisher, who concelebrated the Mass with the Pope was presented with the Pallium to bring home to Sydney for the formal investiture by the Pope’s personal representative in Australia, the Apostolic Nuncio, Archbishop Adolfo Tito Yllana on 25 July at St Mary’s Cathedral.

It is an occasion to be shared with the clergy of the diocese and parishioners and all are invited.

The Pallium
Click here to read information regarding Archbishop Fisher’s investiture with the Pallium on July 25th.