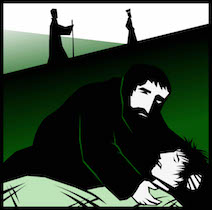 But the man was anxious to justify himself and said to Jesus, ‘And who is my neighbour?’ Jesus replied, ‘A man was once on his way down from Jerusalem to Jericho and fell into the hands of brigands; they took all he had, beat him and then made off, leaving him half dead. Now a priest happened to be travelling down the same road, but when he saw the man, he passed by on the other side. In the same way a Levite who came to the place saw him, and passed by on the other side. But a Samaritan traveller who came upon him was moved with compassion when he saw him. He went up and bandaged his wounds, pouring oil and wine on them. He then lifted him on to his own mount, carried him to the inn and looked after him. Next day, he took out two denarii and handed them to the innkeeper. “Look after him,” he said “and on my way back I will make good any extra expense you have.” Which of these three, do you think, proved himself a neighbour to the man who fell into the brigands’ hands?’ ‘The one who took pity on him’ he replied. Jesus said to him, ‘Go, and do the same yourself.

The Parable of the Good Samaritan is perhaps the most widely read and discussed of Jesus’ parables. Of inexhaustible value, it is multilayered and can be understood with new and deeper insights with each reading.

Like each of us, a lawyer desires to know what he must do to inherit eternal life. In his reply, which is posed as a question, Jesus tries to illicit from the lawyer his understanding of the Law. The lawyer’s reply takes the form of the Shema, a prayer said twice-daily by most Jews, ‘You must love the Lord your God with all your heart, with all your soul, with all your strength, and with all your mind, and your neighbour as yourself.’

The Shema was a convenient rote-learned answer to give, and may well have been offered by the lawyer by virtue of custom and practice rather than from a true understanding. Thus, the follow-up question ‘and who is my neighbour?’

Jesus certainly does not give the answer expected, for those gathered to hear his preaching would have abhorred the idea that a Samaritan was to be considered a neighbour. Samaritans were reviled by the Jewish people and were considered to be blasphemers of the Law. Ironically, in his parable Jesus typecasts two men of the Temple, a Priest and a Levite, as violating the Law and failing to live in accordance with the Shema.

The parables were often counter-cultural and this is evidenced in the actions of the Samaritan. Risking attack, robbery and injury to himself the Samaritan goes to the aid of a man who had been robbed, beaten and left abandoned by the roadside. It is often forgotten that the Samaritan was himself a traveller, who would have been an unwelcome stranger in Judea. The Samaritan’s status as an outcast magnifies his deed of compassion, for he has acted at his own peril.

This parable illuminates the distinctions between the Old Law and the New Covenant. We are reminded that our neighbour is not just a select few, but all people, irrespective of our relationship with them. Jesus, who came not to abolish the Law but bring it to perfection (Mat 5:17-18), constantly challenged his followers to deepen their love of God and others.

Luke’s Parable of the Good Samaritan reminds us that we are called to love our neighbour as much as we love ourselves (Mat 22:39), and this love must be extended even to our enemies (Mat 5:44).