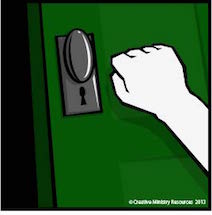 Once Jesus was in a certain place praying, and when he had finished, one of his disciples said, ‘Lord, teach us to pray, just as John taught his disciples.’ He said to them, ‘Say this when you pray: “Father, may your name be held holy, your kingdom come; give us each day our daily bread, and forgive us our sins, for we ourselves forgive each one who is in debt to us. And do not put us to the test.” ‘

He also said to them, ‘Suppose one of you has a friend and goes to him in the middle of the night to say, “My friend, lend me three loaves because a friend of mine on his travels has just arrived at my house and I have nothing to offer him”; and the man answers from inside the house, “Do not bother me. The door is bolted now, and my children and I are in bed; I cannot get up to give it to you.” I tell you, if the man does not get up and give it to him for friendship’s sake, persistence will be enough to make him get up and give his friend all he wants.

‘So I say to you: Ask, and it will be given to you; search, and you will find; knock, and the door will be opened to you. For the one who asks always receives; the one who searches always finds; the one who knocks will always have the door opened to him. What father among you would hand his son a stone when he asked for bread? Or hand him a snake instead of a fish? Or hand him a scorpion if he asked for an egg? If you then, who are evil, know how to give your children what is good, how much more will the heavenly Father give the Holy Spirit to those who ask him!’

This Gospel passage, although not as detailed as Matthew’s account (6:9-15), contains the essence of the Lord’s Prayer, which is embraced by and common to the whole Christian Tradition. As practising Jews the disciples were not unfamiliar with prayer, in fact they would have followed the ritual of praying three times per day. Of particular significance to them was the Shema, a prayer said twice daily. ‘You must love the Lord your God with all your heart, with all your soul, with all your strength, and with all your mind, and your neighbour as yourself.’

Jesus did not want prayer to be an empty ritual however, and so he presented to his disciples a new way of praying, the words of which we continue to proclaim today. Central to this new way was the term Abba or Father. Breaking with custom and practice Jesus addressed God by name, and it was a name with which his followers could feel both respect and intimacy. This simple Aramaic term – Abba gave emphasis to the strong relational bond between God and humanity. God was our loving Father.

The Lord’s Prayer is presented in Luke’s Gospel as a series of brief petitions; for daily sustenance, the forgiveness of sins and deliverance from temptation. Although breaking with tradition in its reference to God as Abba it follows traditional Jewish prayer rubrics by affirming the holiness of God’s name in its opening verse. This verse also alludes to the focus of Jesus’ public ministry, i.e. to bring about the Kingdom of God on earth. This is far more explicit in Matthew’s account “Your Kingdom come, Your will be done, on earth as it is in heaven” (6:10).

After presenting them with the formula of the Lord’s Prayer Jesus uses a parable to counsel his followers to have faith in prayer and to be persistent in its daily practice. Persistence and patience will be rewarded, but in God’s time, not our own.

“Ask, and it will be given to you; search, and you will find; knock, and the door will be opened to you.”

As this affirmation would have gladdened the hearts of Jesus’ followers, so too should it do the same for us as we come before our Father and trust in him with all our hearts (Prov 3:5).