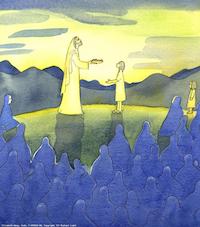 Jesus went off to the other side of the Sea of Galilee – or of Tiberias– and a large crowd followed him, impressed by the signs he gave by curing the sick. Jesus climbed the hillside, and sat down there with his disciples. It was shortly before the Jewish feast of Passover.

Looking up, Jesus saw the crowds approaching and said to Philip, ‘Where can we buy some bread for these people to eat?’ He only said this to test Philip; he himself knew exactly what he was going to do. Philip answered, ‘Two hundred denarii would only buy enough to give them a small piece each.’ One of his disciples, Andrew, Simon Peter’s brother, said, ‘There is a small boy here with five barley loaves and two fish; but what is that between so many?’ Jesus said to them, ‘Make the people sit down.’ There was plenty of grass there, and as many as five thousand men sat down. Then Jesus took the loaves, gave thanks and gave them out to all who were sitting ready; he then did the same with the fish, giving out as much as was wanted. When they had eaten enough he said to the disciples, ‘Pick up the pieces left over, so that nothing gets wasted.’ So they picked them up, and filled twelve hampers with scraps left over from the meal of five barley loaves. The people, seeing this sign that he had given, said, ‘This really is the prophet who is to come into the world.’ Jesus, who could see they were about to come and take him by force and make him king, escaped back to the hills by himself.

The multiplication of the loaves is the only miracle that is recorded in all four Gospels. John’s account forms the preface to Jesus’ extensive discourse on the ‘bread of life’ (6:35-59). Together with the miracle of the water and the wine at the Wedding Feast of Cana (Jn 2:1-11) the miracle known as the ‘Feeding of the Five Thousand’ foreshadows both the Last Supper and the Eucharistic Liturgy we celebrate today.

Unlike the synoptic Gospels John’s account of the multiplication of the loaves mentions the Feast of the Passover (v.6) which was celebrated annually to commemorate Israel’s deliverance from Egyptian slavery (Ex 12). Central to the feast is a liturgical meal in which the story of the Exodus is retold, psalms are sung and a lamb is eaten with unleavened bread. Jesus will give new and greater meaning to the Passover. He will be the true ‘Lamb of God’ (1:29), who will lay down his life to redeem humanity and free us from sin.

At the time of Jesus barley loaves were the food of the poor, and this particular detail recalls the similar miracle of multiplication performed by the prophet Elisha (2 Kings 4: 42-44). According to Scripture scholars the five loaves represent the Torah, the Sacred Scriptures of the Jewish people. Jesus is of course the fulfilment of these Scriptures, which during his public ministry he will break open, revealing their deeper, spiritual meaning so as to further nourish the multitudes.

Today, we continue to be spiritually nourished by the Scriptures and rather than receiving the simple bread of a barley loaf, in the Eucharist we receive the Living Christ, source of eternal nourishment, who is the true ‘bread of life’ (6:35).