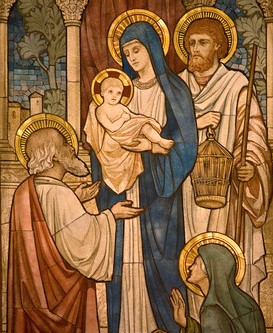 When the day came for them to be purified as laid down by the Law of Moses, the parents of Jesus took him up to Jerusalem to present him to the Lord – observing what stands written in the Law of the Lord: Every first-born male must be consecrated to the Lord – and also to offer in sacrifice, in accordance with what is said in the Law of the Lord, a pair of turtle-doves or two young pigeons. Now in Jerusalem there was a man named Simeon. He was an upright and devout man; he looked forward to Israel’s comforting and the Holy Spirit rested on him. It had been revealed to him by the Holy Spirit that he would not see death until he had set eyes on the Christ of the Lord. Prompted by the Spirit he came to the Temple; and when the parents brought in the child Jesus to do for him what the Law required, he took him into his arms and blessed God, and he said:

‘Now, Master, you can let your servant go in peace,
just as you promised;
because my eyes have seen the salvation
which you have prepared for all the nations to see,
a light to enlighten the pagans
and the glory of your people Israel.’

Joseph and Mary’s presentation of the infant Jesus was not just a religious formality. The words of the prophet Malachi are fulfilled in Mary and Joseph presenting their son along with their humble sacrifice of two turtledoves: “Now I am sending my messenger— he will prepare the way before me; And the lord whom you seek will come suddenly to his temple; The messenger of the covenant whom you desire—see, he is coming! says the LORD of hosts.” Malachi 3:1.

The Mother of God and her husband did not set themselves above the Law. In conforming to the Law, we see God’s entrance into his Temple. Simeon and Anna, pious and elderly, having spent their lives in prayer and waiting in the Temple for the Messiah, have their moment. Here we see Simeon’s glorious exaltation.

This is also where we glimpse what lies ahead. The tiny child snuggled in the manger a few weeks ago is now revealed to be a sign of contradiction. His gentle obedient mother faces a future of sorrow. Simeon asked to depart in peace. What will we ask of the Lord as we celebrate his Presentation?