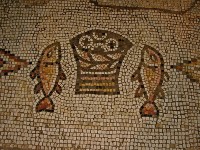 When Jesus received the news of John the Baptist’s death he withdrew by boat to a lonely place where they could be by themselves. But the people heard of this and, leaving the towns, went after him on foot. So as he stepped ashore he saw a large crowd; and he took pity on them and healed their sick.

When evening came, the disciples went to him and said, ‘This is a lonely place, and the time has slipped by; so send the people away, and they can go to the villages to buy themselves some food.’ Jesus replied, ‘There is no need for them to go: give them something to eat yourselves.’ But they answered, ‘All we have with us is five loaves and two fish.’ ‘Bring them here to me,’ he said. He gave orders that the people were to sit down on the grass; then he took the five loaves and the two fish, raised his eyes to heaven and said the blessing. And breaking the loaves he handed them to his disciples who gave them to the crowds. They all ate as much as they wanted, and they collected the scraps remaining, twelve baskets full. Those who ate numbered about five thousand men, to say nothing of women and children.

The multiplication of the loaves is the only miracle, besides the Resurrection, that is recorded in all four Gospels. Although there are similarities across the four, Matthew’s account is unique for its mention of the death of John the Baptist. Upon hearing the news of his cousin’s execution Jesus was saddened and sought out a deserted place, most likely to spend time in quite prayer. Throughout his life and public ministry Jesus endeavoured to find moments when he could be alone in prayer to the Father. John’s death foreshadows Jesus’ own execution, and the persecution of the Apostles, and Jesus would have been deeply aware of this.

As in Mark’s account, Jesus took great pity on the crowd when he saw them and he insisted that they are cared for. Although the disciples want to send the people away Jesus establishes their important role in the early Church, that of nourishing and strengthening the faithful: “give them something to eat yourselves.”  Furthermore, by taking, blessing, breaking and giving in verse 19 Jesus not only foreshadows the institution of the Eucharist at the Last Supper but the Eucharist that we continue to celebrate today. The actions of Jesus in raising his eyes to heaven and blessing the gifts is repeated in each Mass during the Eucharistic Prayer as the priest, in persona Christi, prays: “Father, we bring you these gifts. We ask you to make them holy…”

The feeding of the five thousand recalls the similar miracle of multiplication performed by the prophet Elisha (2 Kings 4: 42-44). According to St. Bede (Homilies on the Gospels), the five loaves represent the Torah and the two fish are the Prophets and the Psalms. Jesus is of course the fulfillment of these Old Testament Scriptures, which during his public ministry he will break open, revealing their deeper spiritual meaning so as to further nourish the multitudes. The twelve baskets of scraps symbolise the twelve disciples through whom Jesus will be able to supply an abundance of spiritual food and nourishment.

Today we have the opportunity to receive this very nourishment by participating in the Eucharistic Liturgy and receiving Holy Communion. We receive the living Christ, True God and True Man. We receive, as St Augustine noted, the “Totus Christus” – the total Christ, who is the “bread of life” (Jn 6:35).