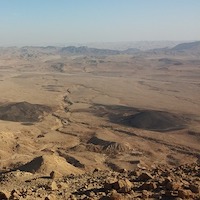 The beginning of the Good News about Jesus Christ, the Son of God. It is written in the book of the prophet Isaiah:

Look, I am going to send my messenger before you;
he will prepare your way.
A voice cries in the wilderness:
Prepare a way for the Lord,
make his paths straight,

and so it was that John the Baptist appeared in the wilderness, proclaiming a baptism of repentance for the forgiveness of sins. All Judaea and all the people of Jerusalem made their way to him, and as they were baptised by him in the river Jordan they confessed their sins. John wore a garment of camel-skin, and he lived on locusts and wild honey. In the course of his preaching he said, ‘Someone is following me, someone who is more powerful than I am, and I am not fit to kneel down and undo the strap of his sandals. I have baptised you with water, but he will baptise you with the Holy Spirit.’

John the Baptist was the predicted forerunner to the Messiah. A Levite and relative of Jesus (Lk 1:5 and 36), John was considered a prophet by many Jews and even by Jesus himself (11:9). His message was accompanied by an austere life of penance and self-denial. John’s clothing recalls the Old Testament prophet Elijah who “wore a garment of haircloth, with a belt of leather about his loins” (2 Kgs 1:8). A figure like Elijah was expected to return before the Messiah (Mal. 4:5) to begin restoring the tribes of Israel (Sir. 48:10).

John announces the imminent coming of “the kingdom of heaven,” which is the spiritual restoration of David’s empire by Jesus the Messiah. The term “Kingdom of heaven” is the dominant motif in Matthew’s Gospel, used 32 times for two reasons: (1) it undercuts the political and military expectations surrounding the Messiah; and (2) while Christ’s kingdom begins on earth, it will reach its full perfection in heaven.

John also identifies himself as the “voice crying in the wilderness.” This is a reference to Isaiah’s oracle who will prepare the way of the Lord (Is. 40:3). All four Gospels connect Isaiah’s words with John’s ministry (cf. Mk 1:3; Lk 3:4; Jn 1:23).

John’s baptising occurs in the Jordan River. This river runs along the eastern side of Palestine and flows southward into the Dead Sea. In the Old Testament, the Jordan is associated with God’s deliverance. Like the Red Sea, it parted so that the Israelites could cross over on dry ground and inherit the Promised Land (Josh 3:14-17). Naaman the Syrian was cleansed from leprosy at this location when he dipped seven times in the river at the command of Elisha (2 Kgs 5:14). Both Old Testament events prefigure the saving power of the Sacrament of Baptism.

John’s baptism needs to be distinguished from Christ’s. John’s was a visible token of repentance and preparation for the Messiah. The administration of water was only a sign of purification. However, Christ’s baptism infuses the Holy Spirit who effects forgiveness and regeneration (Acts 2:38) leading to formal adoption into God’s family.