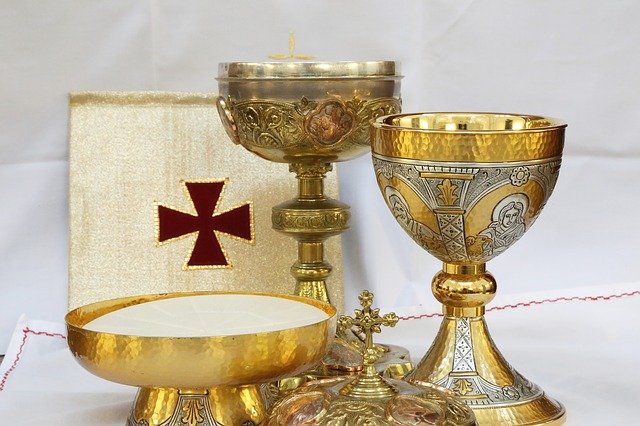 On the first day of Unleavened Bread, when the Passover lamb was sacrificed, his disciples said to Jesus, ‘Where do you want us to go and make the preparations for you to eat the Passover?’ So he sent two of his disciples, saying to them, ‘Go into the city and you will meet a man carrying a pitcher of water. Follow him, and say to the owner of the house which he enters, “The Master says: Where is my dining room in which I can eat the Passover with my disciples?” He will show you a large upper room furnished with couches, all prepared. Make the preparations for us there.’ The disciples set out and went to the city and found everything as he had told them, and prepared the Passover.

And as they were eating he took some bread, and when he had said the blessing he broke it and gave it to them. ‘Take it,’ he said ‘this is my body.’ Then he took a cup, and when he had returned thanks he gave it to them, and all drank from it, and he said to them, ‘This is my blood, the blood of the covenant, which is to be poured out for many. I tell you solemnly, I shall not drink any more wine until the day I drink the new wine in the kingdom of God.’

After psalms had been sung they left for the Mount of Olives.

When Jewish people celebrate the Passover, they are not simply remembering an historical event. Rather, through the retelling of their story of deliverance, and through the ritual use of actions and foods, the past becomes present. The same is true of the Mass, when we participate spiritually in the Paschal Mystery, and are freed of sin by virtue of Christ’s great sacrifice.

The origins of the Mass are revealed in Sacred Scripture. Mark’s account highlights the principal actions of the Liturgy of the Eucharist. Jesus took bread; blessed it; broke it and shared it. The same four actions are revealed in the miracle of the feeding of the multitudes (Mk 6:30-44). This is both the language of sacrifice and the ritual of temple worship.
As Catholics, we believe that Jesus is not offering bread. Rather, he is offering himself, ‘Take,’ he said ‘this is my body.’ We believe in the real presence, i.e. Jesus is present body, blood, soul and divinity.

At the institution of the Eucharist at the Last Supper, Jesus revealed himself as the Lamb of God, a title ascribed to him only once in the Gospels (Jn 1:29). In using this title John the Baptist alluded both to the true identity of Jesus, as well as his ultimate sacrifice and suffering. Just as the Passover lamb, an offering, saved the Jewish people from slavery in Egypt, Jesus – the Lamb of God will save the people from the bondages of sin and damnation. Through the shedding of his blood, a new and permanent covenant will be created between God and humanity.