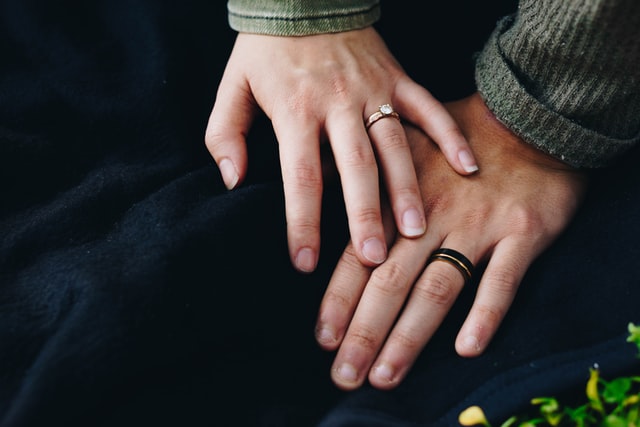 Some Pharisees approached Jesus and asked, ‘Is it against the law for a man to divorce his wife?’ They were testing him. He answered them, ‘What did Moses command you?’ ‘Moses allowed us’ they said ‘to draw up a writ of dismissal and so to divorce.’ Then Jesus said to them, ‘It was because you were so unteachable that he wrote this commandment for you. But from the beginning of creation God made them male and female. This is why a man must leave father and mother, and the two become one body. They are no longer two, therefore, but one body. So then, what God has united, man must not divide.’ Back in the house the disciples questioned him again about this, and he said to them, ‘The man who divorces his wife and marries another is guilty of adultery against her. And if a woman divorces her husband and marries another she is guilty of adultery too.’

People were bringing little children to him, for him to touch them. The disciples turned them away, but when Jesus saw this he was indignant and said to them, ‘Let the little children come to me; do not stop them; for it is to such as these that the kingdom of God belongs. I tell you solemnly, anyone who does not welcome the kingdom of God like a little child will never enter it.’ Then he put his arms round them, laid his hands on them and gave them his blessing.

The Pharisees attempt to lay a trap for Jesus as part of their efforts to destroy him. They anticipate that Jesus will deny the legal right to divorce, thus putting him at odds with Herod Antipas and his mistress, Herodias, who had abandoned their respective spouses to be with each other. They hoped to inflict upon Jesus the same fate that befell St. John the Baptist, who was beheaded for denouncing their union as unlawful.

Under the Deuteronomic Covenant delivered on the plains of Moab (Deut. 1:1-5; 29:1), Moses permitted divorce as a temporary legal concession tailored to the weakness of Israel, a concession not originally granted in the Levitical Covenant ratified 40 years earlier on Mt. Sinai (Exod. 19-24). Jesus now revokes the Mosaic concession and cites Genesis 1:27 and 2:24 as evidencing God’s original intention that marriage be a life-long union between one man and one woman. This marital bond is forged by God himself and cannot be broken by any civil or religious authority. To divorce and remarry is to commit adultery, a warning Jesus directs to both spouses.

After giving his teaching on the indissolubility of marriage, Jesus blesses the children. The Jews were accustomed to present their children to men of holiness for their blessing. Children are the fruit of married love and God intends them to be raised and blessed in the security of a stable and healthy family environment. Jesus praises child-like qualities and declares, “to such belongs the Kingdom of God.” As St. John Chrysostom notes (Homily on Matthew 62), the mind of a child is free of passions and naturally tends to the good. Those who wish to belong to God in this life and enter the Kingdom of the Blessed hereafter should by free choice cultivate the humility, candor, innocence, etc. of children, and must accept, like little children, all the teachings of Christ.