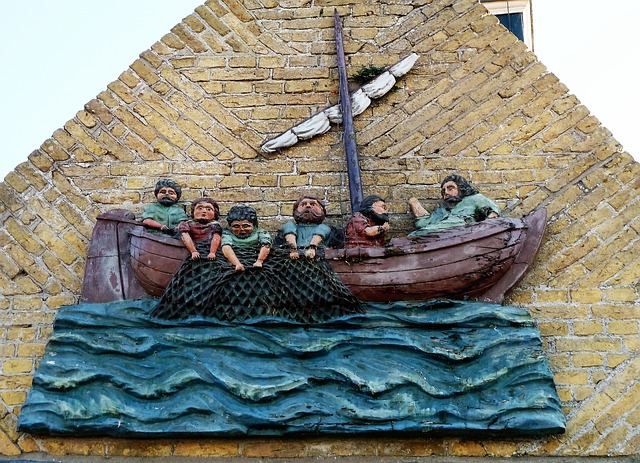 Jesus was standing one day by the lake of Gennesaret, with the crowd pressing round him listening to the word of God, when he caught sight of two boats close to the bank. The fishermen had gone out of them and were washing their nets. He got into one of the boats – it was Simon’s – and asked him to put out a little from the shore. Then he sat down and taught the crowds from the boat.

When he had finished speaking he said to Simon, ‘Put out into deep water and pay out your nets for a catch.’ ‘Master,’ Simon replied ‘we worked hard all night long and caught nothing, but if you say so, I will pay out the nets.’ And when they had done this they netted such a huge number of fish that their nets began to tear, so they signalled to their companions in the other boat to come and help them; when these came, they filled the two boats to sinking point.

When Simon Peter saw this he fell at the knees of Jesus saying, ‘Leave me Lord; I am a sinful man.’ For he and all his companions were completely overcome by the catch they had made; so also were James and John, sons of Zebedee, who were Simon’s partners. But Jesus said to Simon, ‘Do not be afraid; from now on it is men you will catch.’ Then, bringing their boats back to land, they left everything and followed him.

The episode of Jesus calling his disciples occurs by the Lake of Gennesaret, otherwise known as the Sea of Galilee, in the central part of Galilee, which in Jesus’ time was the most flourishing part of Palestine.

After an exhaustive night of fishing, Simon and the other fishermen had caught nothing. Despite the improbability of success, Peter places his trust in Jesus’ words and an abundant catch is the result. We learn from this that fruitfulness in mission will never result from our own efforts, but only when we are attentive to the voice of the Lord. The words “put out into the deep” point to the future missionary activity of the disciples, especially to the Gentile nations.

In his Apostolic Letter, Novo Millennio Ineunte, Pope John Paul II made reference to the Lucan account of the call of the disciples; “Our hearts ring out with the words of Jesus … Duc in altum! These words ring out for us today, and they invite us to remember the past with gratitude, to live the present with enthusiasm and to look forward to the future with confidence: ‘Jesus Christ is the same yesterday and today and forever’ (Heb 13:8).”

“I am a sinful man” (v.8): Faced with Jesus’ miracle Peter has a realisation of his great unworthiness, especially when in the divine presence of Jesus. Yet, Jesus still calls him and assures him “do not be afraid.” In fact, Jesus utters this same expression six times in the Gospel of Luke. Often we too feel a sense of unworthiness, an acknowledgment made during the Liturgy when we utter “Lord, I am not worthy that you should enter under my roof, but only say the word and my soul shall be healed.” The Lord of course responds to us just as he did to Simon Peter “do not be afraid, come follow me.”

“You will be catching men” (v.10): Peter’s occupation as a fisherman foreshadows his future mission, when Christ will send him and the other apostles to preach the Gospel to the ends of the earth. Peter, the first called, will himself have a leading role among the Twelve (Acts 1:15; 2:14; 15:7).

“They left everything and followed him” (v. 11): Luke’s gospel stresses that Christian discipleship demands a loose attachment to worldly possessions and a willingness to part with them if necessary. Those who do give up everything for the sake of the Kingdom will receive in return “a hundred fold”. The response of the first disciples was in stark contrast to the rich young man who, because of his attachment to worldly things, was unable to accept Jesus’ invitation to follow him. True Christian discipleship is challenging. We are often afraid, and the sacrifices are great, but so too are the rewards.