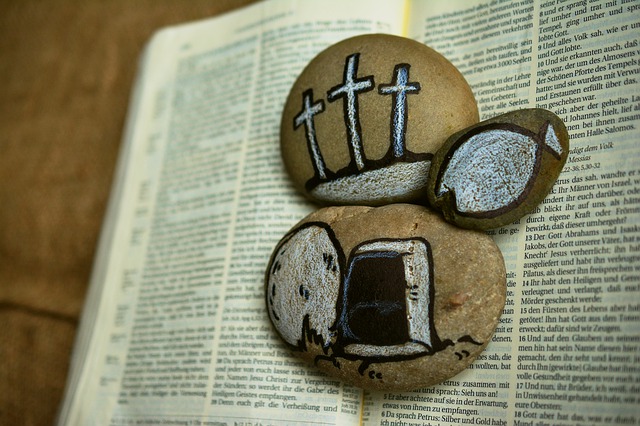 It was very early on the first day of the week and still dark, when Mary of Magdala came to the tomb. She saw that the stone had been moved away from the tomb and came running to Simon Peter and the other disciple, the one Jesus loved. ‘They have taken the Lord out of the tomb’ she said ‘and we don’t know where they have put him.’

John says that it is ‘still dark’, a symbolic reference that the disciples do not yet understand that Jesus, the true light of the world (cf: John 1:4; 8:12; 9:5) has risen from death and the darkness of the tomb.

Although distressed at the death and burial of Jesus, those closest to him became more confused when three days later they found his tomb open and his body nowhere to be found. In the words of Mary Magdalene, ‘They have taken the Lord out of the tomb‘ she said ‘and we don’t know where they have put him‘. The disciples were no less confused at seeing the empty tomb, for as yet ‘they had failed to understand the teaching of scripture, that he must rise from the dead‘.

Peter, head of the college of apostles and first to enter the tomb, establishes officially that the tomb is empty. John, the younger disciple ‘whom Jesus loved‘, with love’s intuition understands immediately the meaning of the empty tomb.

For Christians today, the empty tomb is not a source of confusion but rather the source of our joy and our hope of eternal life, for as St Paul remarked ‘without the resurrection our faith is meaningless‘  (1 Cor 15:14). In rising again, Jesus conquered death not only for himself but for all those who believe in him. Symbolic of Easter Sunday, and the Easter Season, is the Paschal candle and the frequent reiteration of Alleluia, the chant of joy and victory at Christ’s redemption of humanity. The words of St Augustine remind us ‘we are an Easter people and Alleluia is our song‘. In this Easter Season may we rejoice in the resurrection and strive to live in the light of Christ as we proclaim ‘Christ indeed from death is risen, our new life obtaining‘.

As Jesus’ followers, “we look for the resurrection of the dead and the life of the world to come“. In death, life is changed, not ended. On Palm Sunday, we commemorated the prophetic triumph of Jesus as he entered the holy city of Jerusalem. In faith, we hope to share in the life of God in heaven, the new Jerusalem, where every tear will be wiped away and there will be no more death or mourning.  In the words of the Opening prayer of the Easter Vigil:

This is the Passover of the Lord:
If we honour the memory of his death and resurrection
By hearing his word and celebrating his mysteries,
Then we may be confident
That we shall share his victory over death
And live with him forever in God.