At 8pm on Thursday September 18, the official announcement came from the Apostolic Nuncio in Australia, Archbishop Paul Gallagher, indicating that Sydney has a new Archbishop.

The statement read in part:
“His Holiness Pope Francis has appointed as Archbishop of Sydney the Most Reverend Anthony Colin Fisher, O.P., who has been until now the Bishop of Parramatta.”

In a very solemn, yet moving ceremony, the Catholic Church of Sydney gathered to celebrate the prayer of the Church (Vespers from the Divine Office of the Roman Catholic Church). In prayer they eagerly awaited the arrival of the new Archbishop.

Upon entering St Mary’s Cathedral, the new Archbishop was welcomed by the Dean of the Cathedral, Very Reverend Paul Hilder, Auxiliary Bishops of Sydney Terry Brady and Peter Comensoli (who has served the Archdiocese this year as the Apostolic Administrator in the absence of an Archbishop). 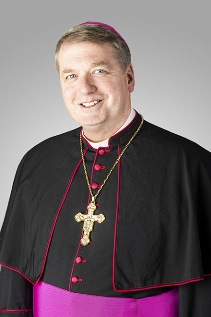 In his homily, Archbishop Fisher asked: “What will this Archdiocese look like when, God willing I retire in 2035?” The Archbishop then shared his thoughts on this question.

“My hope is for a Church in which the Gospel is preached with joy, the wisdom of our tradition mined with fidelity, the sacraments celebrated with dignity and welcome, and the seminaries, convents and youth groups teeming with new life; a Church in which our parishes, chaplaincies and educational institutions are true centres of the new evangelisation, our laity theologically literate and spiritually well-formed, our outreach to the needy effective and growing, and God glorified above all. That will depend hugely on three factors: our clergy and religious; our families; and our young people.” the Archbishop added.

“I also greet those lay faithful, including my collaborators in parishes, schools, universities and agencies. St. John Paul II called you to be prophets of truth, agents of a new evangelization for a new millennium. Pope Benedict XVI called you to be objects of beauty, like precious gems refracting the glory of God and drawing all eyes to Him. And now Pope Francis calls you to be exemplars of goodness, “missionary disciples” like Mary reaching out to her cousin and our suffering world, showing all “the mercy promised to our ancestors.” With her namesake St. Mary MacKillop, you must make it your special care to transmit that faith and mercy to the young.”

For the Youth of the Archdiocese, the new Archbishop had a special message to share.

“And to those young people of Sydney, I say with special affection: open your hearts to the adventure of the Gospel. In my bull of appointment you heard tonight the Holy Father refer to you as spes Ecclesiae, “the hope of the Church.” I am depending on you to lend me all your energy and idealism. Never buy the lies that nothing is true, all is relative, your ideals illusory, your good works in vain. With God on your side, my young friends, who can be against you?”

After communion, the new Archbishop moved throughout the Cathedral to bless the people and in turn, received many greetings and good wishes. Archbishop Fisher thanked Archbishop Hart for concelebrating the Mass and Bishop Comensoli for his work as Apostolic Administrator of the Archdiocese of Sydney in recent months. The new Archbishop thanked all his family, friends, diocesan clergy and the many people that had made the evening possible.

The motto of Archbishop Fisher is : ‘Veritatem facientas in caritate’ from St Paul’s Letter to the Ephesians. In English it translates as: ‘Speaking the truth in love’.

Archbishop Fisher, your collaborators in Catholic Education welcome you and wish you God’s peace and many blessings as the ninth Archbishop of Sydney.