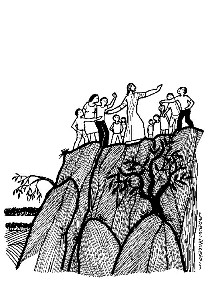 Jesus began to speak in the synagogue, ‘This text is being fulfilled today even as you listen’. And he won the approval of all and they were astonished by the gracious words that came from his lips. They said, ‘This is Joseph’s son, surely?’ But he replied, ‘No doubt you will quote me the saying, “Physician, heal yourself” and tell me, “We have heard all that happened in Capernaum, do the same here in your own countryside”‘. And he went on, ‘I tell you solemnly, no prophet is ever accepted in his own country. There were many widows in Israel, I can assure you, in Elijah’s day, when heaven remained shut for three years and six months and a great famine raged throughout the land, but Elijah was not sent to any one of these: he was sent to a widow at Zarephath, a Sidonian town. And in the prophet Elisha’s time, there were many lepers in Israel, but none of these was cured, except the Syrian, Naaman.’ When they heard this everyone in the synagogue was enraged. The sprang to their feet and hustled him out of the town; and they took him up to the brow of the hill their town was built on, intending to throw him down the cliff, but he slipped through the crowd and walked away.

Following Jesus’ reading from the scroll of Isaiah the mood of those gathered in the synagogue quickly turned against him. Rather than seeing him as the one expected to inaugurate Israel’s national liberation, the listeners viewed Jesus with scepticism and complained, “this is Joseph’s son, surely?” They were unwilling to accord him the status of a prophet because of their familiarity with his humble origins (see 4.24).

Regardless, Jesus goes on to parallel his ministry with the Old Testament prophets, many of whom were rejected and even killed by fellow Israelites. Jesus further vexes the mood of those gathered by referring to the missions of Elijah and Elisha to explain his own. Elijah and Elisha lived during dark times, when God looked unfavourably upon Israel and bestowed blessings upon the Gentiles instead. Elijah and Elisha went, not to the widows and lepers who, even in their poverty, shared the privilege and the status of Israel, but to the widows and lepers of despised, Gentile communities. Jesus declares that the “acceptable year of the Lord” (4:19) will likewise be a time of blessing outside of Israel. This clashed with the Jewish expectation of only future punishment for the Gentile nations. Jesus’ mission to “bring the good news to the poor” (4.18) also threatened the social and religious status quo.

This teaching was a grave threat to the prevailing assumptions about Jewish superiority. It also bordered on blasphemy, for Jesus claimed in this teaching a right that belonged only to God – the right to determine who would share in God’s salvation. Filled with indignation the crowd cast Jesus out of the synagogue and out of the city with the intention of hurling him from a cliff and killing him. Luke uses this event to foreshadow the ultimate rejection of Jesus by his people.