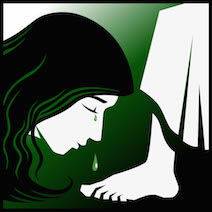 One of the Pharisees invited Jesus to a meal. When he arrived at the Pharisee’s house and took his place at table, a woman came in, who had a bad name in the town. She had heard he was dining with the Pharisee and had brought with her an alabaster jar of ointment. She waited behind him at his feet, weeping, and her tears fell on his feet, and she wiped them away with her hair; then she covered his feet with kisses and anointed them with the ointment.

When the Pharisee who had invited him saw this, he said to himself, ‘If this man were a prophet, he would know who this woman is that is touching him and what a bad name she has.’ Then Jesus took him up and said, ‘Simon, I have something to say to you.’ ‘Speak, Master,’ was the reply. ‘There was once a creditor who had two men in his debt; one owed him five hundred denarii, the other fifty. They were unable to pay, so he pardoned them both. Which of them will love him more?’ ‘The one who was pardoned more, I suppose,’ answered Simon. Jesus said, ‘You are right.’

Then he turned to the woman. ‘Simon,’ he said, ‘you see this woman? I came into your house, and you poured no water over my feet, but she has poured out her tears over my feet and wiped them away with her hair. You gave me no kiss, but she has been covering my feet with kisses ever since I came in. You did not anoint my head with oil, but she has anointed my feet with ointment. For this reason I tell you that her sins, her many sins, must have been forgiven her, or she would not have shown such great love. It is the man who is forgiven little who shows little love.’ Then he said to her, ‘Your sins are forgiven.’ Those who were with him at table began to say to themselves, ‘Who is this man, that he even forgives sins?’ But he said to the woman, ‘Your faith has saved you; go in peace.’ Now it happened that after this he made his way through towns and villages preaching and proclaiming the good news of the kingdom of God. With him went the Twelve, as well as certain women who had been cured of evil spirits and ailments: Mary surnamed the Magdalene, from whom seven demons had gone out, Joanna the wife of Herod’s steward Chuza, Susanna, and many others who provided for them out of their own resources.

Luke’s Gospel account provides us with wonderful insights, both into the nature of hospitality, and the forgiveness of sins. By contrasting the actions of Simon the Pharisee with those of the sinful women we are reminded that all people are in need of forgiveness, and we should be filled with gratitude for the mercy that God has extended to us.

Although Simon has invited Jesus to share a meal with him, his home is not a place of welcome or hospitality. Culturally, Simon’s behaviour was extremely rude and disrespectful. Ironically, it is the sinful woman, already aware that she has experienced the forgiveness of God’s healing love and mercy, who extends true hospitality to Jesus. Recognising that Jesus is more than a prophet and mindful of all of the great things that he has done for her “she covered his feet with kisses and anointed them with ointment.” Her actions were not understood by the onlookers, who criticised not just the women herself, but Jesus on account of his openness to her. Jesus went on to explain that “her many sins must have been forgiven … or she would not have shown such great love.”

The love of the sinful woman is one that Simon cannot extend because he is blind to his own sinfulness. Furthermore, he is blind to Jesus’ true identity, questioning whether Jesus is a prophet, let alone the Son of Man. By telling a short parable of the two debtors, which was in fact an analogous comparison to Simon and the woman, Jesus highlights to Simon why the sinful woman was indebted to him with gratitude. Despite the parable it is unclear as to whether Simon was yet aware of his own sinfulness. Culturally, he had been sinful. He had neglected, and thus disrespected, a guest to his home. As a Pharisee Simon was fully aware of the Law and all of its required rituals, and yet by being inhospitable, he had ignored them. At the same, he had the audacity to judge not only the woman, but Jesus himself.

In farewelling the woman “your faith has saved you, go in peace” Jesus indicates to us that contrition, and with it – the forgiveness that is forthcoming, can only come through faith. Through faith we are conscious of our sinfulness, not blind to it. Through faith we are led to repentance. Through faith we receive God’s mercy in abundance. Therefore, in faith we should be forever mindful of God’s love and welcome Jesus into our lives just as the sinful woman welcomed him into hers.