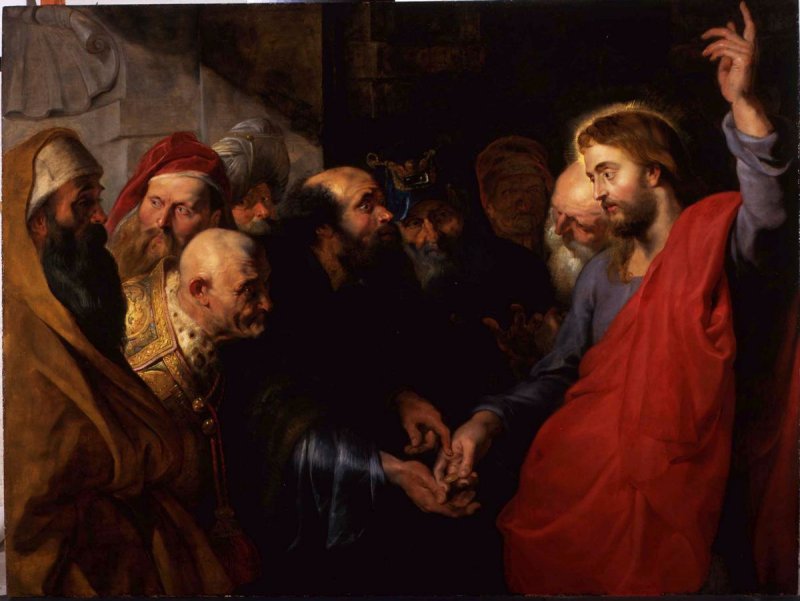 The Pharisees went away to work out between them how to trap Jesus in what he said. And they sent their disciples to him, together with the Herodians, to say, ‘Master, we know that you are an honest man and teach the way of God in an honest way, and that you are not afraid of anyone, because a man’s rank means nothing to you. Tell us your opinion, then. Is it permissible to pay taxes to Caesar or not?’ But Jesus was aware of their malice and replied, ‘You hypocrites! Why do you set this trap for me? Let me see the money you pay the tax with.’ They handed him a denarius, and he said, ‘Whose head is this? Whose name?’ ‘Caesar’s’ they replied. He then said to them, ‘Very well, give back to Caesar what belongs to Caesar – and to God what belongs to God.’

As was so often the case, the Pharisees were again looking for an opportunity to trap Jesus so that he might repudiate the Law. In this instance they endeavoured to bring him into conflict with the authority of the Roman occupiers, or if that failed, they hoped to place him at odds with Jewish custom and practice. On appearances Jesus’ position was unenviable: either he could acquiesce to foreign taxation and therefore betray his own people or he could risk punishment for an act of civil disobedience by encouraging people not to pay taxes.

Fully aware of their plot, Jesus sharply rebukes them ‘hypocrites, why do you set this trap for me?’ But as was the case throughout the Gospels the trap fails. Calling for a Roman coin, one of the men hands a denarius to Jesus. This act alone discredits the man for devout Jews were not meant to carry Roman currency because it made them complicit with the foreign occupiers. It was considered to be idolatry, because the Romans considered their emperor to be a God. Bearing the image of Caesar Tiberius Jesus advises the onlookers that such coins must therefore belong to the Romans, and thus should be given to them.

Jesus’ concern is not with financial or political matters however. Rather, he is adamant that our obligations should focus on the spiritual realm, and that ‘we should give to God what belongs to God.’ To give one’s life to God, Jesus argued that one could not follow the Law through empty ritual or hollow worship. Nor could one treat a man as a deity, as the Romans did with their Caesars. Rather, one has to give their life fully to God in order to live life to the full.