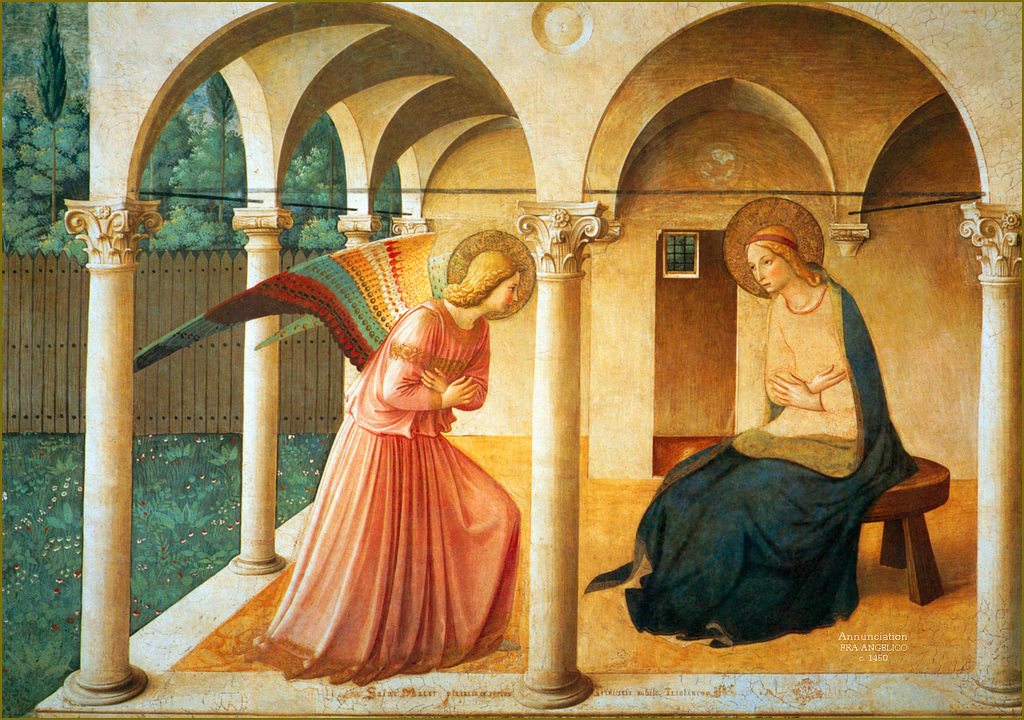 The angel Gabriel was sent by God to a town in Galilee called Nazareth, to a virgin betrothed to a man named Joseph, of the House of David; and the virgin’s name was Mary. He went in and said to her, ‘Rejoice, so highly favoured! The Lord is with you.’ She was deeply disturbed by these words and asked herself what this greeting could mean, but the angel said to her, ‘Mary, do not be afraid; you have won God’s favour. Listen! You are to conceive and bear a son, and you must name him Jesus. He will be great and will be called Son of the Most High. The Lord God will give him the throne of his ancestor David; he will rule over the House of Jacob for ever and his reign will have no end.’ Mary said to the angel, ‘But how can this come about, since I am a virgin?’ ‘The Holy Spirit will come upon you’ the angel answered ‘and the power of the Most High will cover you with its shadow. And so the child will be holy and will be called Son of God. Know this too: your kinswoman Elizabeth has, in her old age, herself conceived a son, and she whom people called barren is now in her sixth month, for nothing is impossible to God.’ ‘I am the handmaid of the Lord,’ said Mary ‘let what you have said be done to me.’ And the angel left her.

As we approach the Feast of Christmas and ready ourselves to receive family and friends throughout the festive season, it is worth pausing a moment to reflect on what the Feast is really celebrating. The birth of Jesus, in which Christians believe that God took on human form and came amongst us in the person of Jesus. It all began with a simple faith filled response from Mary. ‘Yes!’