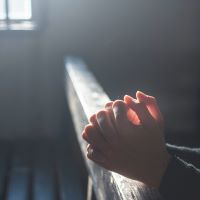 Jesus spoke the following parable to some people who prided themselves on being virtuous and despised everyone else, ‘Two men went up to the Temple to pray, one a Pharisee, the other a tax collector. The Pharisee stood there and said this prayer to himself, “I thank you, God, that I am not grasping, unjust, adulterous like the rest of mankind, and particularly that I am not like this tax collector here. I fast twice a week; I pay tithes on all I get.” The tax collector stood some distance away, not daring even to raise his eyes to heaven; but he beat his breast and said, “God, be merciful to me, a sinner.” This man, I tell you, went home again at rights with God; the other did not. For everyone who exalts himself will be humbled, but the man who humbles himself will be exalted.’

Like so many of his parables, Jesus tells the story of the Pharisee and the tax collector to challenge the attitudes of those who gathered to hear his preaching, in this instance the self-righteous. Throughout the Gospels the Pharisees are often presented as uncompromising, hypocritical and extremely judgemental of others; they view themselves as being the custodians of the Law, considering that outward piety will earn them God’s blessing and favour. Such was the cultural milieu of the time. To this end Jesus presents a parable that is counter-cultural in its message, highlighting that the Pharisees were not in fact righteous, but rather it is a tax-collector, a profession deemed sinful, that is worthy of this affirmation.

Within the Parable, the Pharisee (meaning ‘separated one’) exalts himself, declaring “I am not grasping, unjust, adulterous” and he engages in proud self-righteousness by claiming not only to be better than a tax collector but the “rest of mankind”. He is also presumptuous, believing that simple adherence to traditional forms of piety such as fasting and the payment of tithes is an automatic guarantee of divine blessing. What is noticeable is his failure to mention a love of God or others, which are in fact the bedrock principles that underpin Jewish religious beliefs and practices.

In contrast to the Pharisee, the tax collector places himself humbly before God, seeking both forgiveness and mercy. Rather than listing “shallow credentials” he acknowledges the weakness of his human condition. In spite of his deficiencies God will hear his prayer and comfort him.

As with his other parables Jesus concludes with a line that is both powerful and poignant, one which can be applied universally as a guiding principle to the way we live; “for everyone who exalts himself will be humbled but the man who humbles himself will be exalted.”