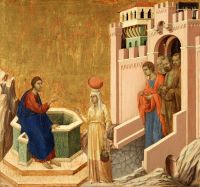 Jesus came to the Samaritan town called Sychar, near the land that Jacob gave to his son Joseph. Jacob’s well is there and Jesus, tired by the journey, sat straight down by the well. It was about the sixth hour. When a Samaritan woman came to draw water, Jesus said to her, ‘Give me a drink.’ His disciples had gone into the town to buy food. The Samaritan woman said to him, ‘What? You are a Jew and you ask me, a Samaritan, for a drink?’ – Jews, in fact, do not associate with Samaritans. Jesus replied:

‘If you only knew what God is offering
and who it is that is saying to you:
Give me a drink,
you would have been the one to ask,
and he would have given you living water.’

‘You have no bucket, sir,’ she answered ‘and the well is deep: how could you get this living water? Are you a greater man than our father Jacob who gave us this well and drank from it himself with his sons and his cattle?’ Jesus replied:

‘Sir,’ said the woman, ‘give me some of that water, so that I may never get thirsty and never have to come here again to draw water. I see you are a prophet, sir. Our fathers worshipped on this mountain, while you say that Jerusalem is the place where one ought to worship.’ Jesus said:

‘Believe me, woman, the hour is coming
when you will worship the Father
neither on this mountain nor in Jerusalem.
You worship what you do not know;
we worship what we do know;
for salvation comes from the Jews.
But the hour will come – in fact it is here already –
when true worshippers will worship the Father in spirit and truth:
that is the kind of worshipper
the Father wants.
God is spirit,
and those who worship
must worship in spirit and truth.’

The woman said to him, ‘I know that Messiah – that is, Christ – is coming; and when he comes he will tell us everything.’ ‘I who am speaking to you,’ said Jesus ‘I am he.’

Many Samaritans of that town had believed in him on the strength of the woman’s testimony, so, when the Samaritans came up to him, they begged him to stay with them. He stayed for two days, and when he spoke to them many more came to believe; and they said to the woman, ‘Now we no longer believe because of what you told us; we have heard him ourselves and we know that he really is the saviour of the world.’

Many Samaritans of that town believed in him on the strength of the woman’s words of testimony, ‘He told me everything I have done.’ So, when the Samaritans came up to him, they begged him to stay with them. He stayed for two days, and many more came to believe on the strength of the words he spoke to them; and they said to the woman, ‘Now we believe no longer because of what you told us; we have heard him ourselves and we know that he is indeed the Saviour of the world.’

Jesus’ encounter with the Samaritan woman is a story of conversion, a journey in faith. Like so many episodes within the Gospels, Jesus transforms and heals a broken life, enabling a stranger to see his true identity.

In keeping with the counter-cultural nature of his public ministry Jesus awaits a Samaritan woman at Jacob’s well. In doing so he ignores the enmity between the Jews and Samaritans and he breaks the taboo of meeting alone with a woman, especially one of ill repute.

By virtue of his simple request “give me something to drink” Jesus engages the woman in a conversation that will change her life. She is shocked that he knows of her promiscuity, and immediately identifies him as a prophet. Jesus reveals an intimate knowledge of the woman’s life without judging her. Although she had come to draw from Jacob’s well the Samaritan woman draws on the words of Christ and thus receives a spring of living water. Whilst Jesus attests to her that he is the Christ, the one for whom the people await, the Samaritan woman has already discerned truth and she goes to give testimony to those within her community.

This brief encounter extends the irony that “a prophet is never accepted in his own country” (Lk 4:24). Upon commencing his public ministry in Nazareth Jesus was set upon by a mob who hustled him from the town with the intention of throwing him from a hilltop. By contrast the Samaritan people of Sichar acclaim him as “Savior of the world” (v45) and beg him to stay with them. Throughout the Gospels Jesus is rejected by his own people and often it is only the stranger, the broken and the “lost flock of Israel” (Mt 15:24) that perceive his true identity.

Jesus’ visit to Sichar, a Samaritan village, foreshadows the final instructions given to the Apostles: “you will be my witnesses not only in Jerusalem but throughout Judea and Samaria, and indeed to the ends of the earth” (Acts 1:8). The living water of Jesus, received through Baptism, was for Jews and Gentiles and pagans alike. No-one was and is to be denied from drinking from the well of Christ. And like the Samaritan woman, once we have received this living water we are called to be witnesses to Christ and his Good News.