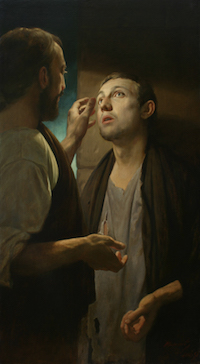 As Jesus went along, he saw a man who had been blind from birth. He spat on the ground, made a paste with the spittle, put this over the eyes of the blind man and said to him, ‘Go and wash in the Pool of Siloam’ (a name that means ‘sent’). So the blind man went off and washed himself, and came away with his sight restored.

His neighbours and people who earlier had seen him begging said, ‘Isn’t this the man who used to sit and beg?’ Some said, ‘Yes, it is the same one.’ Others said, ‘No, he only looks like him.’ The man himself said, ‘I am the man.’

They brought the man who had been blind to the Pharisees. It had been a sabbath day when Jesus made the paste and opened the man’s eyes, so when the Pharisees asked him how he had come to see, he said, ‘He put a paste on my eyes, and I washed, and I can see.’ Then some of the Pharisees said, ‘This man cannot be from God: he does not keep the sabbath.’ Others said, ‘How could a sinner produce signs like this?’ And there was disagreement among them. So they spoke to the blind man again, ‘What have you to say about him yourself, now that he has opened your eyes?’ ‘He is a prophet’ replied the man.

‘Are you trying to teach us,’ they replied ‘and you a sinner through and through, since you were born!’ And they drove him away.

Jesus heard they had driven him away, and when he found him he said to him, ‘Do you believe in the Son of Man?’ ‘Sir,’ the man replied ‘tell me who he is so that I may believe in him.’ Jesus said, ‘You are looking at him; he is speaking to you.’ The man said, ‘Lord, I believe’, and worshipped him.

Throughout the Gospels there are a number of episodes in which Jesus cures people who are blind, e.g. the stories of Bartimaeus (Mark 10:46-52) and the two blind men (Matthew 9: 27-31). These episodes, like that of the man born blind, are not so much accounts of Jesus’ miraculous powers but rather they reveal that the faith of the afflicted brought healing. Unlike Bartimaeus and the two blind men who call out “Jesus, Son of David, have pity” Jesus intervenes into the blind man’s life so that “the works of God might be displayed in him.” Once cured, he proclaims that Jesus is a prophet and under the interrogation of the Pharisees he vehemently defends Jesus’ actions as being the work of God.

This encounter not only reveals the journey in faith of the man born blind but it contrasts his attitudes to those of the Pharisees, who while not being physically blind, are blind to the true identity of Jesus. The Pharisees who proclaim “we are the disciples of Moses” view themselves as being the custodians of the Law, but through their strict observance they fail to live according to the spirit of the Law and fail to recognise the works of God. They are “foolish people who have eyes but do not see, who have ears but do not hear” (Jeremiah 5:21). Hence, by seeing truth and rejecting it they will be judged.

John’s Gospel passage not only confirms that Christ came into the world for the purpose of judgement but also for transformation and restoration. Jesus is the light of the world through whom the veil of darkness will be lifted and sight restored. Not only were the blind man’s eyes opened to sight for the very first time but so too was his heart, opened to the knowledge that Jesus was the Son of Man.

Although we may not be physically blind our sight of Jesus is often obscured. We must open our eyes, ears and hearts so that we are not the foolish people spoken of by Jeremiah but instead are like the blind man of John’s Gospel who sees that Jesus Christ truly is the light of the world.