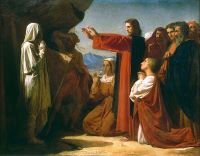 The sisters Martha and Mary sent this message to Jesus, ‘Lord, the man you love is ill.’ On receiving the message, Jesus said, ‘This sickness will end not in death but in God’s glory, and through it the Son of God will be glorified.’

Jesus loved Martha and her sister and Lazarus, yet when he heard that Lazarus was ill he stayed where he was for two more days before saying to the disciples, ‘Let us go to Judaea.’

On arriving, Jesus found that Lazarus had been in the tomb for four days already. When Martha heard that Jesus had come she went to meet him. Mary remained sitting in the house. Martha said to Jesus, ‘If you had been here, my brother would not have died, but I know that even now, whatever you ask of God, he will grant you.’ ‘Your brother’ said Jesus to her ‘will rise again.’ Martha said, ‘I know he will rise again at the resurrection on the last day.’ Jesus said:

‘I am the resurrection and the life.
If anyone believes in me, even though he dies he will live,
and whoever lives and believes in me
will never die.
Do you believe this?’

‘Yes, Lord,’ she said ‘I believe that you are the Christ, the Son of God, the one who was to come into this world.’ Jesus said in great distress, with a sigh that came straight from the heart, ‘Where have you put him?’ They said, ‘See how much he loved him!’ But there were some who remarked, ‘He opened the eyes of the blind man, could he not have prevented this man’s death?’ Still sighing, Jesus reached the tomb: it was a cave with a stone to close the opening. Jesus said, ‘Take the stone away.’ Martha said to him, ‘Lord, by now he will smell; this is the fourth day.’ Jesus replied, ‘Have I not told you that if you believe you will see the glory of God?’ So they took away the stone. Then Jesus lifted up his eyes and said:

‘Father, I thank you for hearing my prayer.
I knew indeed that you always hear me,
but I speak
for the sake of all these who stand round me,
so that they may believe it was you who sent me.’

When he had said this, he cried in a loud voice, ‘Lazarus, here! Come out!’ The dead man came out, his feet and hands bound with bands of stuff and a cloth round his face. Jesus said to them, ‘Unbind him, let him go free.’

Many of the Jews who had come to visit Mary and had seen what he did believed in him.

John’s Gospel account of the raising of Lazarus is a dramatic representation of the power of faith. Throughout the Gospels Jesus encounters strangers who are healed and restored to fullness of life by virtue of their belief in him. Mary and Martha however are not strangers to Jesus; rather these sisters of Bethany are loved by him. Given his close friendship with them one is struck by Jesus’ apparent indifference to the news of Lazarus’ illness, for he remained for two days before travelling to Bethany. This was not indifference however, for Jesus already knew of the miracle he was to perform, ‘our friend Lazarus is resting, I am going to wake him’, aware that it would help onlookers believe in him.

Although Mary and Martha responded quite differently to the arrival of Jesus, Martha rushing to meet him, Mary remaining with her fellow mourners, both immediately lamented ‘if you had been here, my brother would not have died.’ While Jesus reassured Martha that Lazarus would rise again he was moved both to compassion and action by the sight of Mary’s distress, and he too wept.

Jesus transforms a tomb of death and decay into a place of life, a corpse into a living, walking body, and in so doing he reassures the faith of those gathered that anyone believing in him will never die. Ultimately, the raising of Lazarus prefigures Jesus’ own resurrection. Ironically, although Thomas witnessed the raising of Lazarus and Jesus’ power over death, he later doubts the good news of the resurrection shared with him by his fellow disciples.

We are called to be a people of faith not doubt, for through faith Jesus will comfort and console us; heal and restore us and enable us to share in his promise of eternal life.