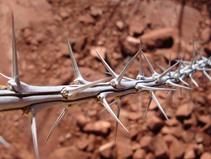 Jesus left the house and sat by the lakeside, but such crowds gathered round him that he got into a boat and sat there. The people all stood on the beach, and he told them many things in parables.

He said, ‘Imagine a sower going out to sow. As he sowed, some seeds fell on the edge of the path, and the birds came and ate them up. Others fell on patches of rock where they found little soil and sprang up straight away, because there was no depth of earth; but as soon as the sun came up they were scorched and, not having any roots, they withered away. Others fell among thorns, and the thorns grew up and choked them. Others fell on rich soil and produced their crop, some a hundredfold, some sixty, some thirty. Listen, anyone who has ears!’

Then the disciples went up to him and asked, ‘Why do you talk to them in parables?’ ‘Because’ he replied ‘the mysteries of the kingdom of heaven are revealed to you, but they are not revealed to them. For anyone who has will be given more, and he will have more than enough; but from anyone who has not, even what he has will be taken away. The reason I talk to them in parables is that they look without seeing and listen without hearing or understanding. So in their case this prophecy of Isaiah is being fulfilled:

Common to each of the synoptic gospels, the parable of the sower represents the way in which the word of God is received and responded to differently in the world. Not all people are receptive to the word, for it has fallen on rock or among thorns and they fail to grow in faith and Christian maturity. At the same time, however, others show themselves to be people of “rich soil”, receptive to the word and living as true witnesses to Christ and his teachings.

In essence, the parables told by Jesus related to the Kingdom of God. The story of the sower is no different. What is quite different however, is that in Mathew’s account Jesus explains the meaning of the parable rather than leaving it as an allegory to be reflected upon and interpreted for he was deeply aware that many within his audience “look without seeing and listen without hearing or understanding”.

The parable of the sower has enormous implications for those of us involved in the great task and responsibility of evangelisation. Although Jesus is alluding to himself as the sower we too are invited to spread the seed and preach the Good News of Christ and the Kingdom of God. As Christians, we are not only called to evangelise to those with open hearts and minds but to the indifferent and to the hostile. Our words will fall among patches of rock and stone, bearing little reward but we should not be disheartened. Rather we should hope and pray that the seed that we plant, and the message that we share, will take root and eventually flourish and blossom.

Paradoxically, we are both the sower and the soil. Many of us have a shallow receptivity to the word and after a brief moment of joy, the roots of our faith quickly shrivel up and die. We must take precautions to ensure that our faith is not short-lived. Too often in our society we search for a quick fix, and this is true with religion. We want immediate gratification and some see religion as an instant panacea. A rich harvest takes time however. We must be prepared to be patient, to on occasions endure suffering and to treasure and ponder the word of God in our hearts (Luke 2:19), knowing that its full meaning may only be revealed with time.

The very nature of our contemporary society makes it difficult for the seed of God’s word to take root in our lives. Secularism, materialism and an all pervasive sexism are like chocking thorns that distract us from our faith and our moral compass. We must blind ourselves to these distractions and open our eyes, ears and hearts to the seed of the sower, to the word of God. Then, and only then, will our lives reap a rich harvest and eternal reward.