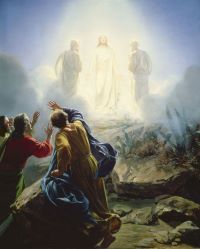 Jesus took with him Peter and John and James and went up the mountain to pray. As he prayed, the aspect of his face was changed and his clothing became brilliant as lightning. Suddenly there were two men there talking to him; they were Moses and Elijah appearing in glory, and they were speaking of his passing which he was to accomplish in Jerusalem. Peter and his companions were heavy with sleep, but they kept awake and saw his glory and the two men standing with him. As these were leaving him, Peter said to Jesus, ‘Master, it is wonderful for us to be here; so let us make three tents, one for you, one for Moses and one for Elijah.’ – He did not know what he was saying. As he spoke, a cloud came and covered them with shadow; and when they went into the cloud the disciples were afraid. And a voice came from the cloud saying, ‘This is my Son, the Chosen One. Listen to him.’ And after the voice had spoken, Jesus was found alone. The disciples kept silence and, at that time, told no one what they had seen.

After the shock of Jesus’ first Passion prediction (8:31-33), the Transfiguration reassures the faith of three disciples – Peter, James and John, each of whom were destined for leadership positions in the early Church. Beholding the glory of Jesus in the Transfiguration they are convinced of his divine Sonship.

Theologically, this event on Mt. Tabor, where Jesus manifests his divine splendour, is the New Covenant counterpart to Mt. Sinai, where God revealed his glory to Moses (Ex. 24:15-18) and Elijah (Kings 19:8-18), the representatives of the Law and the Prophets.

According to St. John Chrysostom (Homily on Matthew 56), Christ appeared with both Moses and Elijah to dispel the accusations that he transgressed the law and was a blasphemer.

Jesus defended himself “Do not imagine that I have come to abolish the Law or the Prophets, I have come not to abolish them but to complete them” (Matthew 5:17) and at the Transfiguration he brought before him those who shone conspicuous regarding the Law (Moses) and zealous for the glory of God – the Prophets (Elijah).

Like Jesus’ baptism, this event reveals the Trinity: the Father’s voice is heard (v. 7), the Son is transfigured (v. 2) and the Spirit is present in the cloud (v. 7). Symbolically, Christ took three disciples up the mountain to signify that those who have faith in the Trinity in this life will come to behold the three persons of God in heavenly glory.

The final injunction “Listen to him” alludes to Deut. 18:15. Yahweh promised to raise up another prophet, so that just as Israel received instructions for worship and life issued through Moses, so must they obey the words of his prophetic successor. The Father uses this passage to identify Jesus as the promised prophet.

Paradoxically, Jesus is not just the prophet; he is the proclaimed (Mark 1:1-11).