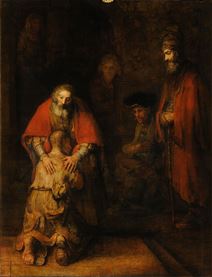 The tax collectors and the sinners were all seeking the company of Jesus to hear what he had to say, and the Pharisees and the scribes complained. ‘This man’ they said ‘welcomes sinners and eats with them.’ So he spoke this parable to them:

‘A man had two sons. The younger said to his father, “Father, let me have the share of the estate that would come to me.” So the father divided the property between them. A few days later, the younger son got together everything he had and left for a distant country where he squandered his money on a life of debauchery.

‘Now the elder son was out in the fields, and on his way back, as he drew near the house, he could hear music and dancing. Calling one of the servants he asked what it was all about. “Your brother has come” replied the servant “and your father has killed the calf we had fattened because he has got him back safe and sound.” He was angry then and refused to go in, and his father came out to plead with him; but he answered his father, “Look, all these years I have slaved for you and never once disobeyed your orders, yet you never offered me so much as a kid for me to celebrate with my friends. But for this son of yours, when he comes back after swallowing up your property – he and his women – you kill the calf we had been fattening.”

‘The father said, “My son, you are with me always and all I have is yours. But it is only right we should celebrate and rejoice, because your brother here was dead and has come to life; he was lost and is found.”’

In ancient Israel, table-fellowship was an expression of friendship and acceptance. The Pharisees, seeing Jesus eating with disreputable men, were therefore scandalised. However, the parable that follows indicates that God does not simply welcome penitent sinners, but seeks them out.  The parable of the Prodigal Son, often called the parable of the Forgiving Father, signifies our relationship with God the Father who has an infinite love and care for each of us. A Father, who always seeks to reconcile us with him when we have strayed in our own lives, rejoices when we are found.

During the time of Jesus it was both unusual and even shameful for a son to demand his inheritance before his father’s death. Here, the prodigal son compounds the dishonouring of his father by squandering his inheritance in sinful living.

The depths to which the prodigal son falls is highlighted in the imagery of feeding swine. Since Jews considered pigs unclean animals, only the most desperate conditions would force the son to take this disgraceful position. Working for a Gentile employer would also require a violation of the Sabbath rest.

The embrace of the father after the prodigal son’s return recalls the mercy shown to Jacob (Gen. 33:4) and the joys of family reunion in the patriarchal narratives (Gen. 45; 46). The complete restoration of the prodigal son to full family membership is symbolised by the bestowal of the robe and ring, symbols of honour and authority within a household. It also symbolises a restoration from curse (spiritual death) to blessing (eternal life). The significance of this restoration is announced joyously by the father to both the servants and the elder brother “we should celebrate and rejoice because your brother was dead and is now alive, he was lost and is found” (v.32).

The older brother’s grumbling “look all these years I have slaved for you and never once disobeyed your orders …but for this son of yours” (vv 29-30) signified the bitterness of the Pharisees, who wrongly saw Jesus’ acceptance of sinners as a violation of covenant justice. The father in the parable is innocent of such a charge; he is simply forgiving and loving of his son, who recognised his errors and turned to his father for mercy. We too must continually reflect on the life we lead, the choices we make and the actions we take. We can be assured that the Father not only waits for us but seeks us out when we have strayed from him. “Return to the Lord, your God. For gracious and merciful is he, slow to anger, rich in kindness and relenting in punishment” (Joel 2:13). Luke’s parable of the Prodigal Son forms a trilogy of parables, including the Lost Sheep (15: 1-7) and the Lost Coin (15: 8-10) that reveal God’s limitless and unconditional love.